During 2020, I wrote a book about living with MS. I decided that the best people to ask about living with the condition were people who live with the condition. So I carried out interviews, asking people with progressive and relapsing remitting about how they deal with it, and how it has affected various areas of their lives. At first, it was going to be a book to explain having MS to people who don’t have it, but after people kept saying the same things to me, I realised that the time around diagnosis could be handled better, so I wrote it particularly for people who are at that stage. But it is also of use to people who are around MS - family, friends, practitioners - to understand better what MS is and what it’s like to live with. And what is done and can be done to slow its progress.

I’VE CHOSEN THIS TOPIC BECAUSE THE FEAR OF WHEELCHAIRS IS WIDESPREAD, AND I WANT TO BUST A FEW MYTHS.  IT’S UNLIKELY THAT YOU WILL USE A CHAIR SOON AFTER DIAGNOSIS. BUT SINCE SO MANY PEOPLE FEAR THEM, LET’S GET SOME OF THOSE THOUGHTS OUT OF THE WAY, SO YOU CAN CONCENTRATE ON MORE IMPORTANT THINGS.

‘Oh God, I’m going to end up in a wheelchair’

Right, first off, stop thinking ‘Little Britain’. It’s not like that. There is a whole range of different chairs that run on batteries, giving the user more possibilities and maintaining independence. I just had to get that one in early.

One of the most common things that people fear when they have the MS diagnosis is: ending up in a wheelchair. It used to be my fear, not that I thought about it with any rationality or understanding. In the early days, that fear loomed large for me. But it’s immediately daft, if you think about it. Wheels are not put on things in order to restrict the user. Look at the word. Wheelchairs have wheels on them, and they wouldn’t if the intention was for the person to sit in a corner facing the wrong way, now, would they? They’re to aid mobility, just like aeroplanes are to aid flying; we wouldn’t try doing it without one.Loads of people who have MS don’t use wheelchairs. But there are many who do, although often not in the early years at all. Some use them all the time, others less often, when symptoms flare up. If you get to the stage where vertical transport (walking) is very difficult, you have options:

a. You can sit on the couch, only getting up to move for food, bathroom, and bed. You can do that.

b. You can keep struggling to shift yourself using a walking frame or rollator, often finding that by the time you get to your destination, you have missed out on part or all of what you were going for. And you will probably fall over fairly often, which won’t give anyone the impression that you’re coping. You can do that.

Getting about on wheels is not as easy as on fully functioning legs, I won’t kid you about that. Here are some of the things that people think will happen if they ‘end up in a wheelchair’:

1. that able-bodied people - I call them abs; the disabled crowd are ‘dabs’ - will think less of them. That view, that wheelchairs are somehow less - is just daft, to put it politely. People use wheelchairs to give them mobility; their brains are still in their heads, where they’ve always been and always will be. They’re not sitting on them. (A person’s grasp of anatomy must be particularly poor if they think that.) Wheelchair users are giving themselves the chance to do more than they could otherwise. It’s anything but being stupid, or less capable/willing to take part.

2. that people will ignore them, or talk over them (or both). Well yes, that does happen a bit. It’s bloody annoying, but it’s not the norm. Anyone who thinks that people who are seated are irrelevant probably doesn’t know the first thing about anything. You do need more people to engage their brains in order to make your life easier, but on the whole, abs are OK, and often better than OK - they offer help but don’t insist, they make way and hold doors; they realise that there is a sentient human being in there. Quite often, an offer of help is accompanied with a sheepish smile, but that’s probably because they’re afraid of offending the dab. There’s a reluctance among abs to point out to wheelchair users that they’re sitting in a wheelchair. I know, thanks.

3. that their life will be over, and it’s all downhill from here. When you’re sitting down, you see the world from a different perspective. For a start, it’s easier to nosy into people’s front rooms when you’re passing houses. You have more time to survey the scenery when you’re seated and not struggling to keep upright. It’s easier to chat to people. It’s easier to think when you don’t have to concentrate on putting one foot in front of the other. It’s far less tiring than trying to persuade your stubborn left leg to just m-o-v-e. Someone using a chair will probably find that they have a lot more brain space available for things that interest them once they’re sitting down and are in fact actually mobile again.  It can take time to find the advantages over your previous mode of self-transport, but people find them. And in some cases, they say that using a chair changed their life (for the better).

For many, the migration from Abland to Dabland happens when their mobility becomes an issue. When they need a walking aid, they feel disabled. They may have had years of problems with memory, or a weak bladder, or migraines, or their tongue getting in the way of their speech, or whatever, but it’s the mobility which is the thing which tips them over the border into Dabland, as far as they’re concerned. Ssh, I’ll say it quietly so they don’t hear:  they’ve been living with disability for years already, but they haven’t realised or acknowledged it. But people who have to use a wheelchair often say that it’s not a big issue, and that it actually enables them to live their lives better. There is a fairly common view that a person’s life is over when they sit in a wheelchair, but it’s not the experience of a lot of wheelchair users. Someone even said to me that ‘loss of mobility is nothing’.

Abs have caught on a bit, to give them credit, and partly because of the use of wheelchairs to make the point. Up until 1995, there was no onus on anyone to give access to disabled people (dabs). There had been campaigning for years by groups of dabs to get on the first rung of the ladder to equality. A group of wheelchair users went into central London, chained themselves to buses, and brought the traffic to a standstill. The police were called, and then had to find bolt cutters to cut the chains; they arrested the protesters but had to walk with them to the nearest police station, because they didn’t have an adapted car. When they got there, they had to de-arrest them because there was no level access into the station.

Probably partly as a result, the UK is now pretty good for disability legislation. For instance, it’s compulsory for new buildings, including houses, to be accessible; it’s not permissible to sack somebody simply because they’re disabled; there is the government scheme Access to Work, which, as you may have guessed, is to give dabs access to work. In part, the disability legislation is about wheelchair users, but it’s much broader than that. It’s almost as if dabs are human beings or something. Mistakes are still made, and abs can be either dim or in denial sometimes, but the situation is much better now. Abs don’t deserve a medal for it, but perhaps they should receive a nice little pat on the head. Well done.

So if you’re at the ‘oh god, I’m going to end up in a wheelchair’ stage, it’s not the experience you think it would be if you ever got there. It’s nothing like a definite outcome, but if it were to happen to you, it would be OK; you would deal with it, and you would see the advantages of it. And life would go on.

This blog is primarily based on the experiences of lots of MSers.It was 2013 when RRMS decided to set up shop on my front lawn.

I struggled with it at first, but now I'm actually writing about it, much to my surprise. In 2020, I wrote  a book about living with MS, based on interviews with people who have MS. It's aimed particularly at people who have recently been diagnosed, but it's also useful for the people round them, to help them understand it better. 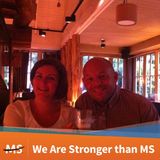 Staying Positive and Focused Can Help With Your MS Fight 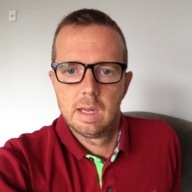